Home
Stocks
Need to Know: Here’s a warning for investors who are tempted by this year-end rally for stocks
Prev Article Next Article
This post was originally published on this site

Another day, another round of stock market records?

That’s the setup, at least when looking at stock market futures for Friday.

The big names that we’ve run a little hot and cold on this year, such as Amazon.com AMZN, +4.45%, were out in front, pulling the Santa-rally sleigh to fresh records on Thursday. (Remember, that traditional year-end rally for stocks that starts in the last 5 trading days in December and the first 2 in January).

Apple AAPL, +1.98%  logged its best one-day gain in weeks, and has gained 84% with just three trading days left in 2019, the iPhone maker is looking at its best annual return in 10 years.

Here’s a tweet that shows just how much weight some of these popular companies are swinging around:

Onto our call of the day, which warns individual investors against getting sucked into this Santa Rally, lest they want to pay the piper come January.

“This is the time to be taking profits, not adding new money. Without a doubt, most of the people buying today will come to regret that decision over the next few weeks as prices dip back under these levels,” writes popular financial blogger Jani Ziedins of Cracked Market. While he says that a pullback may not occur until February.

That bit of gloom flies in the face of optimism that’s been swirling around — that stocks are due for some first-quarter lift off. However, as Ziedins reminds us, “institutional money managers are on vacation and not participating in this price action.

“That means whatever happens over the next few days is meaningless and has no bearing on what comes next,” said Ziedins. In fact, it could have the opposite effect. “A good few days now could be stealing profits from January and the higher we go now, the less room we have left next month,” he says.

To be sure, someone has to be trading all those Amazon shares. See the stat below.

Read: The usual suspects aren’t driving those record closes for the Nasdaq

Our chart comes from The Market Ear blog, which shows the rising and falling fortunes of two exchange-traded funds this year. On the upside, we’ve got the SPDR S&P 500 ETF Trust SPY, +0.53%, which is a popular play on that index, while the cannabis-company focused ETFMG Alternative Harvest ETF MJ, -2.39% shows just how tough 2019 has been for that nascent sector. 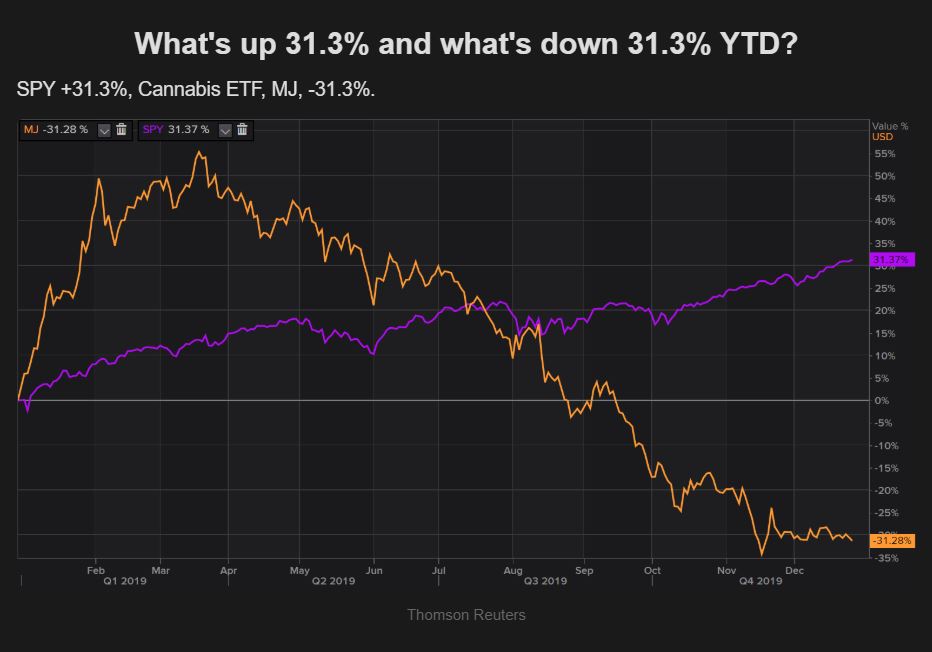 Shares of Amazon logged their highest close since July on Thursday, according to Dow Jones Market Data. Preliminary data showed 6 million shares changed hands, which was the highest since 9.6 million on Oct. 25.

Disney’s DIS, +0.28%  “Star Wars: The Rise of Skywalker” logged the second-best Christmas Day ever at the domestic box office.

Your diet, that electric car, aren’t helping save the planet