Home
Stocks
The New York Post: Thousands of New York buildings may pose same risk as the one whose damaged façade killed architect last week
Prev Article Next Article
This post was originally published on this site 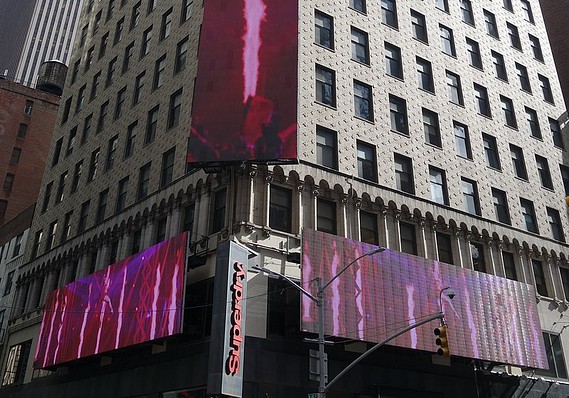 729 Seventh Avenue, at the southeast corner of 49th Street and 7th Avenue mear Times Square in Manhattan, as photographed in March 2018.

The building that fatally dropped a hunk of façade on a Manhattan woman last week is just one of thousands citywide with open violations — and some of the longest-offending buildings have no scaffolding to protect unsuspecting passersby, the New York Post says it has learned.

Some of those violations — including one against a crumbling Bronx building looming over a daycare playground — are more than a decade old, a review of city records found.

Of more than 5,300 open citations citywide against buildings for failing to maintain safe exterior walls under NYC Admin Code 28-302.1, the Post has identified the 10 addresses with the longest-standing open infractions that also lack protective sidewalk sheds.

Among the offenders is the five-story building at 333 150th St. in the Bronx, which abuts the Brightside Academy daycare center’s playground and has open violations dating to 2008 for a rear retaining wall that collapsed in 2004 and at one point blocked the building’s rear entrance for years.

Today, the building’s façade is visibly damaged, with cracks on the molding surrounding the building — a source of concern for parents from the neighboring child care site.

“That’s scary,” said mom Keila Ocasio, 30, who was dropping off her 3-year-old twins at Brightside on Thursday. “We walk down this street with our kids all the time. It could be anybody.”

Architect Erica Tishman was killed Tuesday after a chunk of facade dropped off 729 Seventh Ave. in Manhattan.

The structure had “damaged terra cotta at areas above 15th floor in several locations which poses a falling hazard for pedestrians,” the city Department of Buildings found when the owners were issued a violation in April for “failure to maintain exterior building facade” in a safe manner.

Meanwhile, the 150th Street building in the Bronx still has 13 open violations — including one for the same code under which 729 Seventh Ave. was cited.

While its owners paid the $5,000 fine associated, there is no indication they fixed the underlying issue, city records show.

And it’s not the only property in the city with longstanding, unresolved violations under the same section of law.

A six-story building at 207 Clinton St. in Manhattan has a 2008 facade violation for “corroded soffit/facia at top of bldg” and “cornice at 5th floor is separating from exterior wall.”

“I think it’s terrible that they got a complaint in 2008 and they haven’t done anything about it,” said neighbor Orlando Perez, 62. “Obviously the laws sanctioning the landlords are too lenient. They probably figured it’s worth leaving it like that than spending money to fix it.”

A property at 14-18 Boerum St. in Brooklyn has racked up so many violations — and nearly $30,000 in unpaid fines — that one neighbor said the owners “don’t do work, they just make holes.”

The owners were cited under 28-302.1 in 2015 for missing bricks on the fifth floor, broken awnings on two other floors, and a “7th floor balcony crack,” the records show.

Other properties identified by the New York Post with long-open facade violations under Admin Code 28-302.1 are:

• A seven-story mixed-use building at 1627 Amsterdam Ave. hit with a violation in 2011 for failing to maintain an “exterior decorative cornice” and for “severly [sic] corroded tin.”

• An apartment building at 254 Seaman Ave. in Inwood cited in 2013 for “cracks, deteriorating and displacement in parapet facade,” and “flower pots stored on facade ledge.”

• The Church of Saint Michael at 424 W. 34th St. in Manhattan, issued a violation for “missing asphalt roof shingles” and “cracked cement stucco” in 2014.

• A mixed-use building at 201 W. 145th St. dinged in 2014 for the “deteriorating condition in parapet,” and “cracking throughout” the building’s exterior.

• An eight-story apartment building at 1670 174th St. in the Bronx slapped with a violation in 2013 for spalling on “balcony slabs.”

In a statement Sunday, Department of Buildings spokesman Andrew Rudansky said the agency swept over more than 1,300 facades that require repairs “to make sure each had appropriate pedestrian protections in place” after Tishman’s death.

“In cases where we found property owners had inadequate pedestrian protections, we are issuing enforcement actions, including orders to put up sidewalk sheds,” he said.

The owners of several buildings identified by the Post did not return calls seeking comment. Others maintained work had been done and claimed the violations were still open because they failed to file the paperwork certifying the repairs had been made.

The owner of 333 150th St., Earl Bailey, insisted the issue was fixed “at least three years ago.”

At Brooklyn’s PS 130, facade and masonry work was completed but has yet to undergo a final inspection, schools spokesman Kevin Ortiz said — adding that work to repair PS 58 will be taken care of by “a full-scale masonry project” that has not begun.

The owners of 1627-1635 Amsterdam Ave. said in a statement that they “contracted to fix the chimney cap” and that a sidewalk shed would go up Monday.

“In other cases, physical work has long been completed, though as a landmarked building, there can be delays before the paperwork is registered by the city,” the statement said.

Despite the city records regarding chimney and brickwork violations at the Church of Saint Michael, a man identifying himself as the pastor claimed the citations were for “plumbing and electrical” issues, “not the facade.”

“That’s all been fixed, yes,” he said. “It was plumbing and electrical.”

An official at one building had a different take, saying the violations there were “fake.”

“There are no violations, basically,” said Miriam Chan of Ymm Realty LLC, which owns 207 Clinton St. in Manhattan. “Those violations are fake violations.”

“So many people, so many people live in the building,” she said. “They don’t pay. Whenever the company asks them to pay they call 311, they create all kinds of information, fake information.”

But, she said, the company “already engaged a structural engineer to take care of the problem.”

This report also appears at NYPost.com.