Home
Stocks
Key Words: Eddie Murphy returns to ‘SNL,’ and brings ‘half of Netflix’s budget’ onstage
Prev Article Next Article
This post was originally published on this site 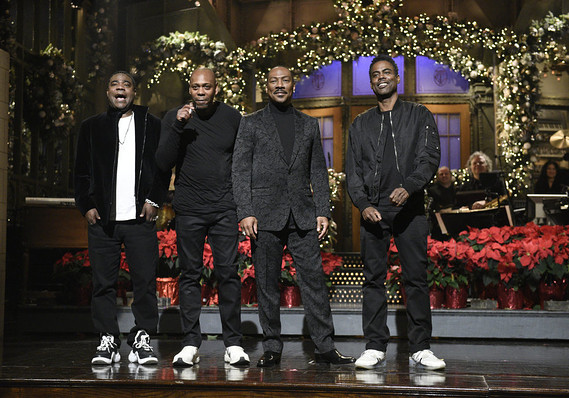 “Right now, you’re looking at half of Netflix’s budget.”

That’s what Eddie Murphy said Saturday during his opening monologue on “Saturday Night Live,” as he was joined onstage by fellow comedy legends Chris Rock, Dave Chappelle and Tracy Morgan.

And while that was an exaggeration, there really was a hefty chunk of Netflix money onstage.

Murphy signed a deal with Netflix Inc. NFLX, +1.41%   earlier this year reportedly worth north of $70 million. Chappelle landed a Netflix deal in 2016 paying him $60 million for three standup specials, according to the New York Post. Rock reportedly scored $40 million in 2016 for two Netflix specials. And Morgan had a Netflix standup special in 2017 — his first since a nearly fatal auto crash in 2014 — for which he was paid an undisclosed sum, but likely in the $10 million-to-$20 million range.

Still, that’s pocket change for Netflix, which spent an estimated $15 billion on content this year. BMO Capital Markets expects that spending to reach nearly $20 million in 2020.

Murphy hosted NBC’s “SNL” on Saturday for the first time since he left the show in 1984, reprising iconic roles such as Gumby and Buckwheat and giving his classic “Mr. Robinson’s Neighborhood” sketch an update, focusing on gentrification:

The show, with musical guest Lizzo, drew raves from viewers and critics, some of whom called it one of “SNL’s” best episodes ever. It was the most-watched episode since Melissa McCarthy hosted in May 2017, early Nielsen numbers showed.