Home
Stocks
This is why Disney’s stock may be up despite bad reviews for ‘Star Wars: The Rise of Skywalker’
Prev Article Next Article
This post was originally published on this site

Shares of Walt Disney Co. rose Friday, and it’s not because critics loved the entertainment giant’s finale of the “Star Wars” saga that debuted Thursday night.

According to the analysis of Imperial Capital,’s David Miller, the stock may be up because investors have gotten smart, and had already sold the shares ahead of the blockbuster movie’s release. And it’s not like negative reviews will stop the movie from raking in well more than $1 billion.

Don’t miss: ‘The Rise of Skywaker’ has the worst reviews for a ‘Star Wars’ movie in 20 years — but does it even matter for Disney?

The movie is estimated to take in more than $160 million over the opening weekend, which would make it the only film in the latest trilogy to not debut over $200 million, according to Box Office Mojo.

There is a trading pattern for Disney’s stock that emerges from time to time, “whenever [Disney] has an expensive, event-driven, tent-pole release, shares usually run up going into the event but sell off on the news, no matter what the opening,” Imperial’s analyst Miller wrote in a note to clients.

He highlighted the stock’s activity around the release of “Avengers: Endgame” earlier this year. The stock had run up 6.3% in four days to close at a record high on the movies release data of April 26, then fell 4.1% the following four sessions despite a record box office.

The post release pullback eventually petered out, and the stock returned to record highs the next month. 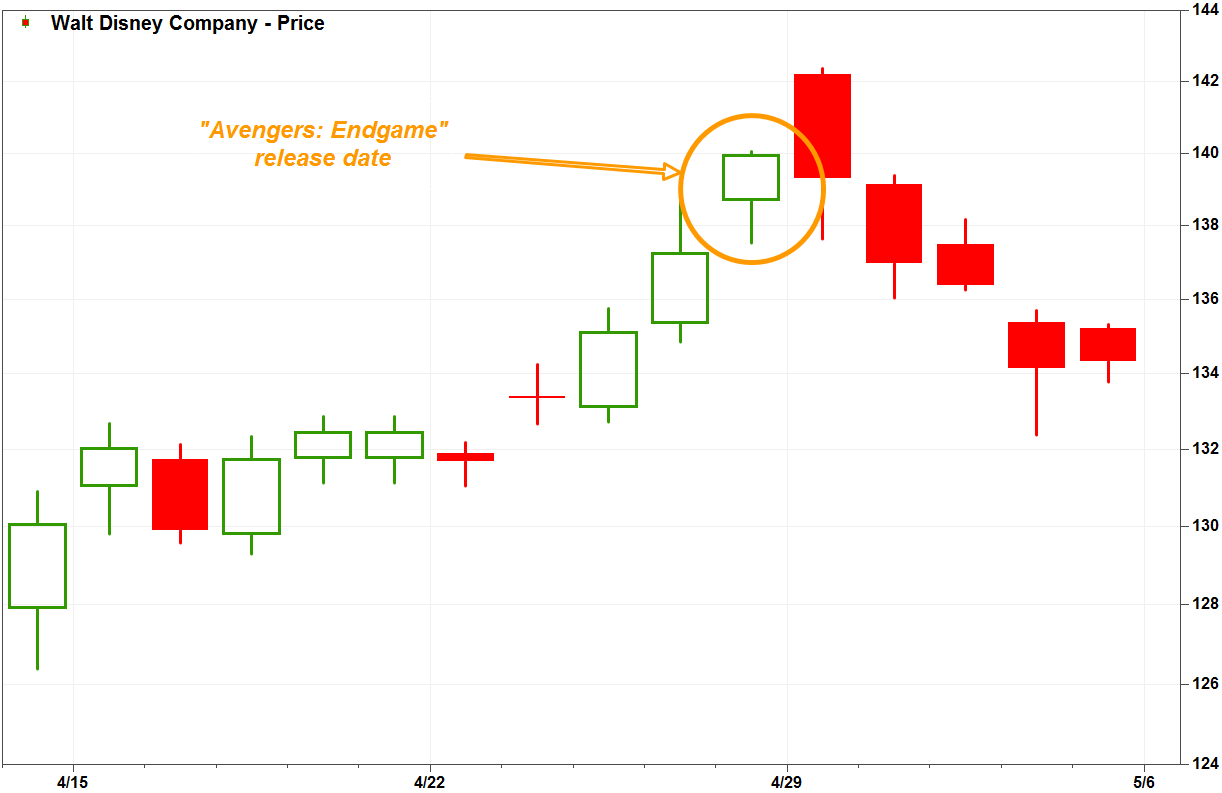 “[O]nly now, instead of said pattern occurring the Monday after the theatrical release, the effect is happening sooner than that simply because those that trade around the stock know that the sell-off is coming eventually, and so execution on those trades occurs sooner and sooner every time there is a major theatrical release,” Miller wrote.

Despite the negative reviews, Miller estimates “The Rise of Skywalker” will likely perform better than expectations.

“We see no reason why this film would not debut at $220 million to $230 million domestically, given recent advance sales data,…and we’re modeling a worldwide aggregate gross of $1.37 billion, or $753.4 million in net rentals back to Disney from the exhibitors,” Miller wrote.

That said, he believes investors have already priced that bullish outlook into the stock, which he said is now “fairly valued.”

The stock, which has pulled back slightly from the Nov. 26 record close of $151.64, has still run up 34% year to date, while the SPDR Communication Services Select Sector exchange-traded fund XLC, +0.45%  has rallied 31% and the Dow has gained 22%.

Miller reiterated his in line rating and $143 stock price target, which is 2.7% below current levels.