Home
Market
Don’t Expect Another Roaring Year for Asia-Pacific Stock Darling
Prev Article Next Article
This post was originally published on this sitehttps://i-invdn-com.akamaized.net/content/pic7a9ffa3f87362caa9917f177a1aad73d.png 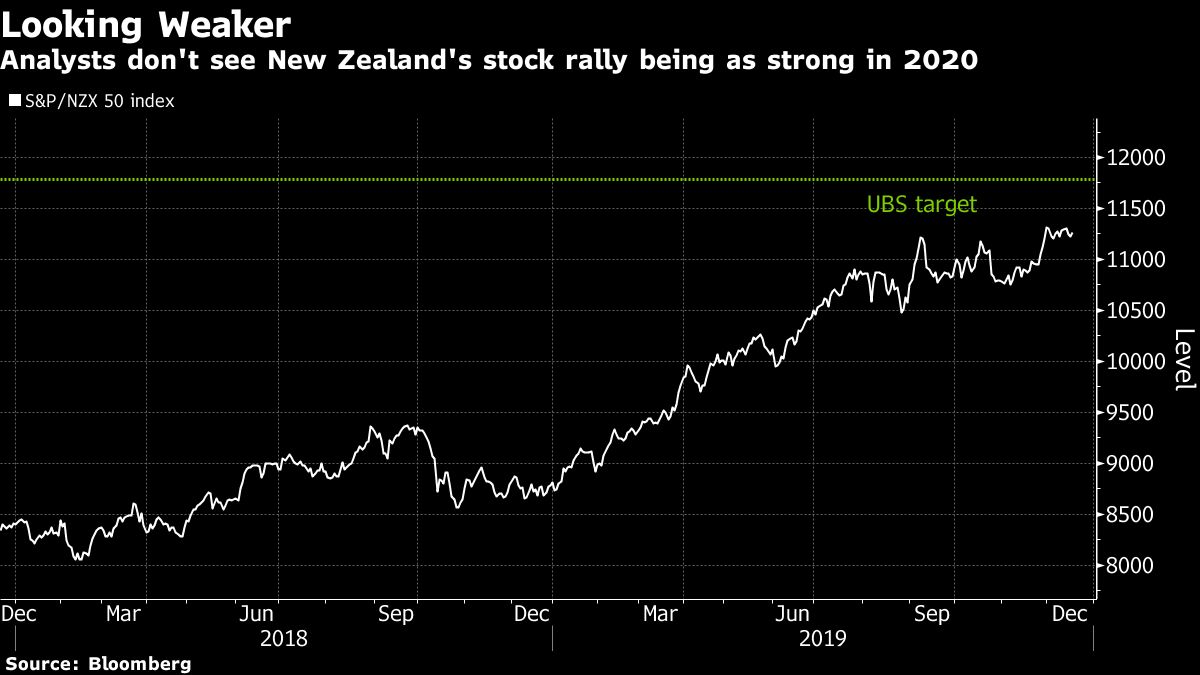 (Bloomberg) — New Zealand equities will find it hard to match the stellar run they have had this year.

The surge this year was mostly due to relaxed monetary policy across the globe, with New Zealand leading the dovish trend by being the first developed-market economy to cut interest rates this cycle. The boost came at the right time to support the market, just as corporate earnings dwindled. Low rates offsetting poor fundamentals is likely to be the theme carrying over to 2020.

Ongoing profit downgrades, combined with a tepid domestic economy point to “largely non-existent” earnings growth of 1% next year, UBS Group AG analysts led by Jeremy Kincaid wrote in a Dec. 3 note. Possible acquisitions, the potential closure of Rio Tinto (LON:) Group’s aluminum smelter and a federal election are all factors that could weigh on equities, they said.

“Like most equity gauges across the globe, upside in stocks has been supported by accommodative RBNZ policy, rather than a terribly strong earnings growth outlook,” said Kyle Rodda, an analyst at IG Markets Ltd. in Melbourne. Still, an improved U.S.-China trade outlook “has and will have a significant impact” on the shares, and a pickup in China’s economy would go a long way to lift up the market, as the country’s exports have been hit by weakened Chinese demand, he added.

New Zealand’s economy also grew at a faster pace in the third quarter, suggesting its slowdown is over. Frances Sweetman, a senior analyst at Milford Asset Management, sees some glimmers of hope in the domestic economy. Increased confidence in the housing market and government plans to boost infrastructure spending could bolster the shares, she said.

“We don’t expect the share market to perform as well next year,” said Sweetman from Auckland. “It should still be a reasonable performance.”