Home
Stocks
In One Chart: Steven Spielberg’s 10 biggest blockbusters on his 73rd birthday
Prev Article Next Article
This post was originally published on this site

The American filmmaker created the first summer blockbuster when he terrorized audiences with “Jaws” in 1975, when he was just 25. And he’s continued making a splash in Hollywood ever since with family-friendly films like “E.T., the Extra-Terrestrial,” franchises like “Indiana Jones” and “Jurassic Park,” as well critically acclaimed dramas like “Schindler’s List” and “Saving Private Ryan” that earned him two Academy Awards for Best Director.

Spielberg turned 73 on Wednesday, and tributes to the director came pouring in over social media sites like Twitter TWTR, +3.37%  and Facebook-owned FB, +2.12%  Instagram as movie lovers shared their favorite flicks from the Hollywood legend.

🎬 “Once a month the sky falls on my head, I come to and I see another movie I want to make.” Happy birthday #StevenSpielberg. pic.twitter.com/EDimfJHNSv

Happy Birthday Steve. You’ll never know what E.T. was for me as a kid. Thanks brother. #StevenSpielberg

It’s this gent’s birthday today, and the whole team here at Amblin wish him the very best.

He’s hard at work in post on WEST SIDE STORY, which, ironically enough, opens in cinemas on his next birthday (2020)!

Spielberg was born in Cincinnati, Ohio, in 1946, and released his first feature film (“Firelight”) in 1964. Since then, he has directed or produced more than 100 movies that have grossed more than $25 billion at the box office, according to Bloomberg’s Billionaire Index.

His net worth is guessed to be somewhere between $3.7 billion and $6.08 billion. He co-founded DreamWorks studios with Jeffrey Katzenberg and David Geffen in 1994, and enjoys a theme park consulting agreement with the Comcast-owned CMCSA, -0.01%   Universal Studios that gives him 2% of all park ticket revenue and a portion of park concession revenue in perpetuity, as the Los Angeles Times has reported.

Related: Steven Spielberg says watching his own life story was an ‘out-of-body experience’

His films have earned him more than 190 awards and more than 200 nominations — including the Best Picture and Best Director Oscars for 1993’s “Schindler’s List,” and another Best Director win for 1998’s “Saving Private Ryan.”

But his lasting influence on entertainment is priceless, giving iconic movie moments such as the flying bicycle scenes in “E.T.” (reflected in Eleven’s supernatural powers on Netflix’s NFLX, +2.49% “Stranger Things”), or Harrison Ford’s Indiana Jones running from a rolling boulder. There’s also his skill with building suspense, such as only hinting at seeing the shark in “Jaws” until the climactic final showdown, or the vibrating water glasses in the “Jurassic Park” jeep warning that the Tyrannosaurus Rex was coming closer.

On deck for 2020 is his film adaptation of the hit Broadway musical “West Side Story” and a still-unnamed Indiana Jones sequel, as well as the “Amazing Stories” anthology series he is predicting for Apple’s AAPL, +0.49% new streaming service, Apple TV+.

So in honor of Spielberg’s 73rd birthday, here’s look at his biggest global box office hits. 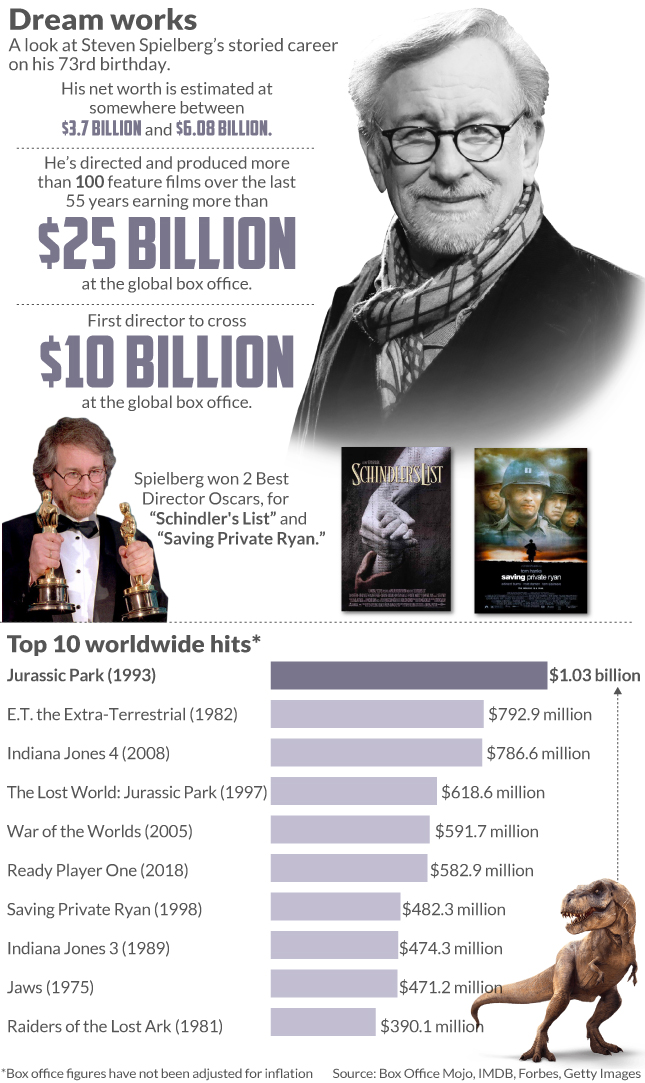