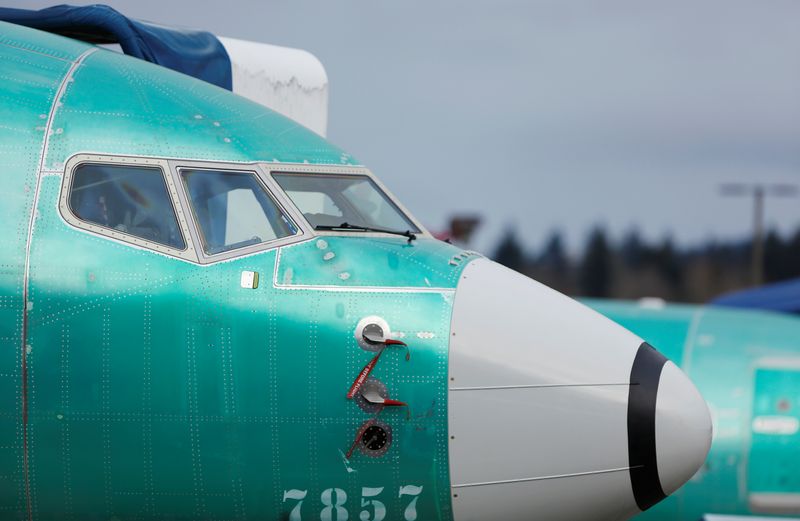 NEW YORK (Reuters) – Dow stalwart Boeing Co’s (N:) shares have nearly erased their gains for 2019 as the plane maker grapples with the fallout from its sidelined 737 MAX jetliner.

Boeing shares fell as much as 2% on Tuesday after the company said it would suspend production of its best-selling 737 MAX in January, in the latest repercussions from two fatal crashes of the now-grounded aircraft.

The initial decline put the stock in slightly negative territory for 2019, but it was back to slightly positive for the year after rebounding during the session. That’s still a huge underperformance compared to the S&P 500’s 27% rise so far in 2019.

The stock has a particularly large influence on the Dow Jones Industrial Average (), as it carries the most weight of the 30 stocks that make up the index. The Dow has underperformed the S&P this year, rising 21%.

Boeing shares have slid some 26% since hitting an all-time high of $446.01 on March 1. Boeing and shares of key suppliers such as Spirit AeroSystems Holdings Inc (N:) have underperformed the S&P 500 () since an Ethiopian Airlines 737 MAX crashed on March 10, the same Boeing model that crashed in Indonesia in October.

Even with the lackluster performance of Boeing shares so far in 2019, the stock has had a strong decade.

Of the stocks currently in the 30-member Dow Jones Industrial Average (), Boeing has rung up the fifth highest total return since 2010 began, rising over 658% during that time through Monday. UnitedHealth Group Inc (N:) and Apple Inc (O:) tallied the highest returns in the Dow, rising 1,009% and 968%, respectively.

Because of Boeing’s relatively high stock price, the stock has a particularly strong influence on the blue-chip Dow, which is weighted by stock prices, as opposed to the S&P 500, for which the companies with the largest market value carry the most sway.

Despite its recent swoon to $329, Boeing shares carry the highest price in the Dow. As of Monday, Boeing’s weight was about 7.9% of the index, followed by UnitedHealth with a weight of 7%. By contrast, Boeing’s weight on the S&P 500 was only 0.66%, compared to about 4.5% for Apple.

Since the decade began, Boeing has contributed more points than any other component to the Dow’s gain, according to Bespoke Investment Group. Over that time, Boeing accounted for 1,907.4 of the total 17,808 points gained by the Dow, or about 10.7% of the rise, according to Bespoke.

Despite the stock’s recent swoon, Boeing remains the biggest industrial company by market value in the S&P 500. Its $184 billion in market cap as of Monday was at least $55 billion above the next biggest industrial sector companies, United Technologies Corp (N:) and Honeywell International Inc (N:).