Home
Stocks
Kelley Blue Book: Look for the Mercedes-Maybach GLS luxury SUV sometime in 2020
Prev Article Next Article
This post was originally published on this site

The Mercedes-Benz GLS-Class is already pretty fancy, but Mercedes now has a solution for those who find that it’s just not fancy enough: the 2021 Mercedes-Maybach GLS 600. With the GLS 600, Mercedes is putting the Maybach nameplate on an SUV for the first time, and the hope is to keep those well-heeled buyers out of a Bentley Bentayga, a Rolls-Royce Cullinan, or a high-end Range Rover.

The Maybach GLS 600 joins the Maybach versions of the S Class at the tippy top of the Mercedes model range. The Mercedes-Maybach GLS 600 distinguishes itself from lesser GLS variants mostly by its exterior visuals and also with its rear-seat accommodations (the thinking apparently is that this is vehicle in which owners will want to be driven). 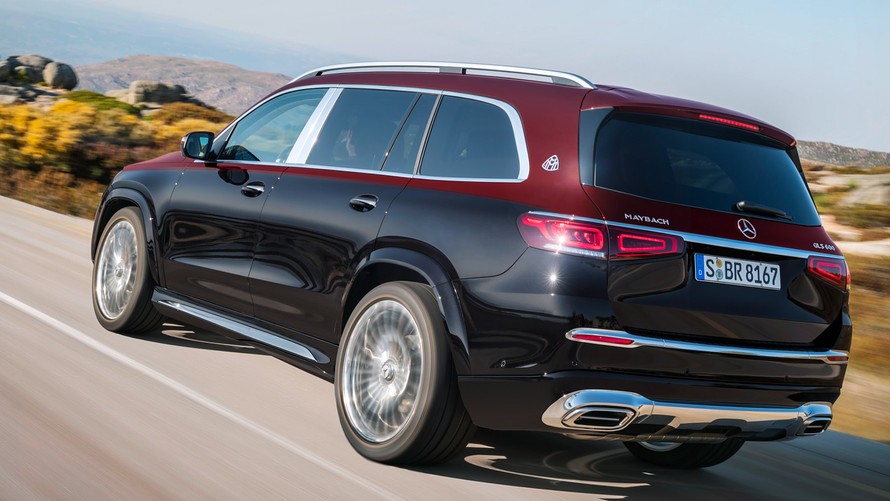 It has eight available 2-tone paint combinations, all unique to the GLS 600.

Outside, the Maybach features an exclusive grille of multiple vertical bars, and it’s topped by a good old-fashioned stand-up hood ornament (another Mercedes SUV first). Interestingly, the hood ornament is the Mercedes three-pointed star rather than the M-M hood ornament that graced the prow of Maybach models during the brand’s brief renaissance as a marque in its own right. The lower fascia features bright metal mesh, and additional brightwork is employed elsewhere, most prominently for the window trim. Power-deployable running boards feature the Maybach logo, and the model rolls specially designed wheels, grandly proportioned at 22 or (optionally) 23 inches. Most striking of all, perhaps, are the eight available 2-tone paint combinations, all unique to the GLS 600. 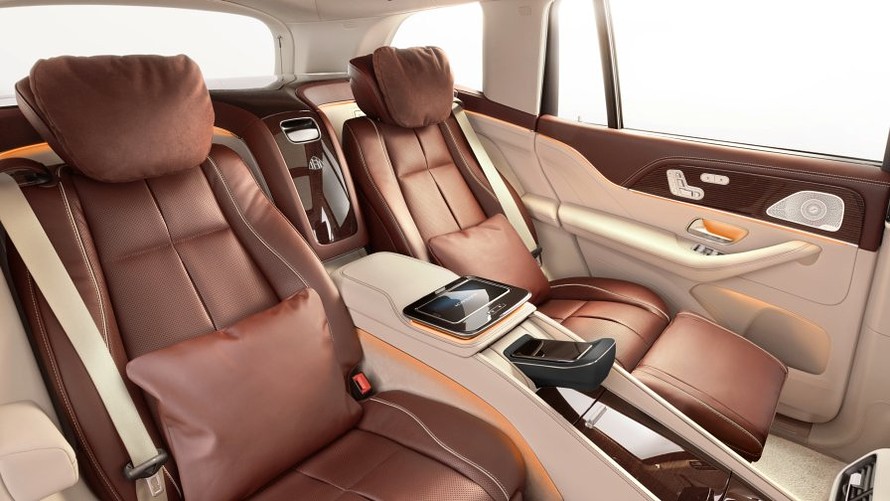 The business-class-style rear seats have extendible footrests and offer heating, cooling, and massage.

Inside, the story is all about the back seat. First off, the third-row seat that is standard on other GLS models is jettisoned. That opens up more space for the second row, which can be a 3-person bench but is more aptly outfitted with individual Executive rear seats. The business-class-style rear seats have extendible footrests and offer heating, cooling, and massage. The seats are bisected by a large console, and behind them a wooden partition separates the cargo hold.

The engine compartment is perhaps the one area where the GLS 600 doesn’t quite offer the very best the GLS can get. The 4.0-liter twin-turbo V8 makes 550 horsepower and 538 lb-ft of torque—ample figures, surely, but less than the 603 horsepower and 617 lb-ft found in the AMG-enhanced GLS 63. As in other GLS models, a 48-volt mild-hybrid system called EQ Boost can contribute an additional 21 horsepower and 184 lb-ft of torque and also powers the active anti-roll bars.

This story originally ran on KBB.com.