Home
Market
European stocks nudge down as trade deadline looms
Prev Article Next Article
This post was originally published on this sitehttps://i-invdn-com.akamaized.net/trkd-images/LYNXMPEFBA0ZD_L.jpg 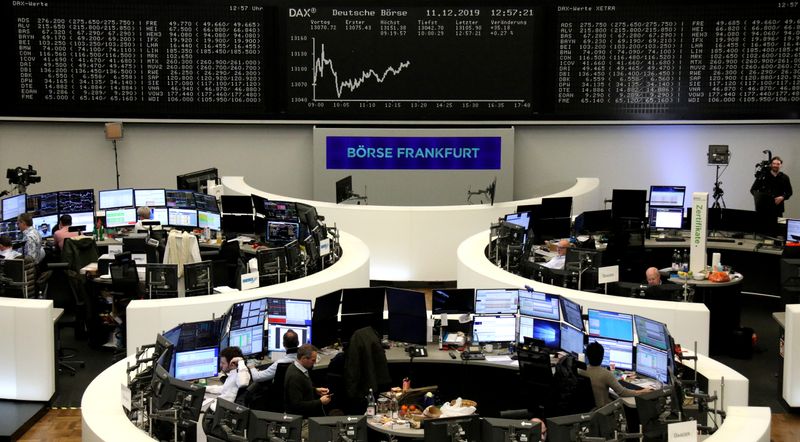 © Reuters. The German share price index DAX graph is pictured at the stock exchange in Frankfurt

U.S. President Donald Trump has only days to decide whether to impose tariffs on nearly $160 billion in Chinese goods, a move that would exacerbate the long-running trade war.

The White House’s top economic and trade advisers are expected to meet in coming days with Trump over the decision, a source told Reuters, though a final decision has not been made.

Amid the uncertainty over trade – the overriding focus for investors through the year – the Euro fell, then recovered, and was last down 0.1%.

The British pound, a high-flier of late, dropped from a seven-month peak after an opinion poll projected a narrower-than-expected victory for the Conservative party in the British election on Thursday. The election is set to decide how the UK will leave the European Union, if at all.

Investors said an initial trade deal was still likely, since it would benefit both Washington and Beijing.

“We still believe that the phase-one deal is something that is convenient for both the presidents on the political and economic side,” Alessia Berardi, senior economist at Amundi. “If the tariffs will be implemented it will be a disaster in the short term.”

In the Middle East, Saudi Aramco (SE:) shares surged 10% above their initial public offering price in their first day of trading. That gave the state-controlled oil company a market value of about $1.88 trillion, making it the world’s most valuable listed company.

At its policy meeting and outlook for the economy, the U.S. Federal Reserve is widely expected to hold rates steady, with investors watching for changes to its view on the economy and its 2% growth forecast for next year.

A surprise to the upside when U.S. inflation data are released at 1330 GMT would further reduce chances for rate cuts next year.

The European Central Bank will hold its first meeting and news conference with Christine Lagarde as president on Thursday.

“Everything is positioned for the two major central banks to stay accommodative,” Berardi said.

The pound fell as low as $1.3107 after a YouGov poll showed the ruling Conservatives heading towards a slimmer majority than was forecast a fortnight ago. YouGov’s research director said the results showed a hung parliament was possible.

Sterling later recovered some of its losses after dropping 1% from its high on Tuesday, when investors were more confident of a Conservative victory that they expect will end uncertainty over Britain’s exit from the EU. It was last trading flat at $1.3151.

The euro was last down 0.8% against the crown at 10.454, leaving the Swedish currency at its strongest since late April.

In commodities, futures fell by 52 cents, or 0.8%, to $63.82 per barrel by late morning, after industry data showed an unexpected build-up in crude inventories in the United States.