Home
Market
Boost for Saudi Arabia as Aramco shares surge 10% on debut
Prev Article Next Article
This post was originally published on this sitehttps://i-invdn-com.akamaized.net/trkd-images/LYNXMPEFBA0H1_L.jpg 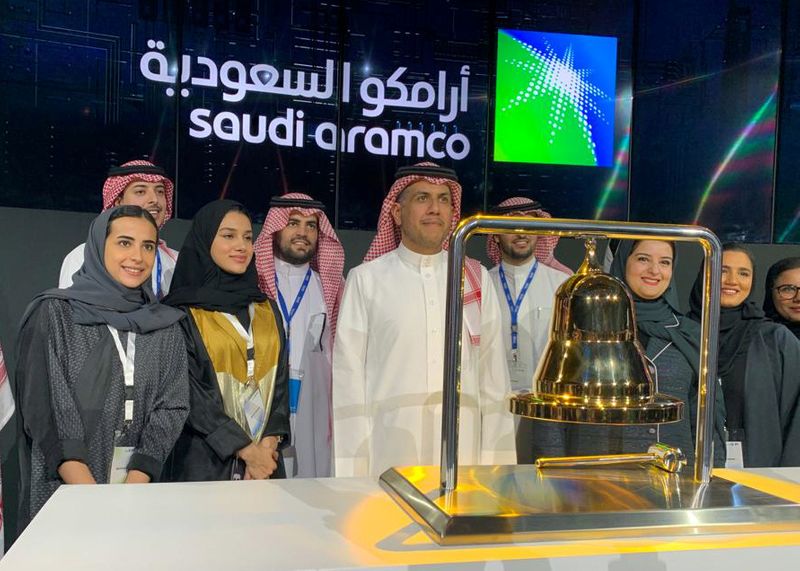 By Marwa Rashad and Saeed Azhar

The shares leapt to 35.2 riyal ($9.39) each, up from the IPO price of 32 riyals and at the daily limit of price moves allowed by the Tadawul exchange.

That gives the state-owned oil giant a market value of about $1.88 trillion, comfortably making it the world’s most valuable listed company, although it will have one of the smallest “free floats” of publicly tradeable shares, at just 1.5%.

By comparison, U.S. oil major Exxon Mobil (N:) has a market capitalization of less than $300 billion, while U.S. tech giant Apple (NASDAQ:) is valued at about $1.2 trillion.

Saudi Arabian Oil Co (Aramco) raised a record $25.6 billion in its IPO last week, the culmination of a years-long effort by the Crown Prince to open up the energy giant to outside investors and raise funds to help diversify the economy away from oil.

The flotation, a major challenge for the Riyadh stock exchange, propels the bourse into the world’s top 10 by value of listed companies.

But Saudi Arabia relied on mainly domestic and regional investors to buy Aramco shares after lukewarm interest from abroad.

“This is a successful IPO and the Aramco listing will add depth to the local market by providing exposure to a vital sector of Saudi Arabia’s economy,” said Bassel Khatoun, managing director, frontier and MENA at Franklin Templeton Emerging Markets Equity.

“We are hopeful that Saudi Aramco uses the Tadawul listing as a springboard to an eventual international listing.”

Aramco shares began trading half an hour after the market open as the Saudi bourse allowed extra time for the “opening auction” period when investors place their bids, in anticipation of high levels of activity.

Aramco chairman Yasir al-Rumayyan and Tadawul’s top executives rang the bell to start dealing in Aramco shares. Within the first hour of trading, 766.8 million shares had changed hands, more than for any other Riyadh listed stock.

Aramco stock will become part of Tadawul index by next week and global benchmarks such as MSCI and later this month, which analysts said should fuel demand, particularly from investors who track such indexes.

“Aramco’s strong debut is not surprising, given that most regional managers were under-allocated in the name and hence it was natural to expect a significantly higher number of bids than offers,” said Nishit Lakhotia, head of research at Bahrain-based securities firm SICO.

“We also believe QFIs (qualified foreign investor) buying will start from next week led by MSCI and then FTSE led inclusions, which may also act as a support for the stock at higher levels.”

Saudi retail investors who hold their shares for six months from the first day of trading can get up to 100 bonus shares, or one for every 10 held, which could limit the supply of shares on the market, said Zachary Cefaratti, CEO of Dalma Capital.

Earlier this month, Tadawul introduced an index weighting cap of 15% to address concerns about the potential impact of Aramco’s flotation and limit the index’s correlation to the oil price.

Aramco’s debut comes as oil prices are being supported by a Saudi-orchestrated move by OPEC and oil producing allies to commit to some of the industry’s deepest output cuts in a decade to try to avert oversupply.

But Riyadh scaled back its global ambitions by only listing Aramco on the Tadawul and cancelling roadshows in New York and London due to muted interest from foreign investors.

Most actively managed funds said they would likely steer clear of the IPO, citing concerns about governance, the environment and regional geopolitics, according to information provided to Reuters by 26 major asset managers outside the Gulf region.

If Aramco shares gain 10% on both Wednesday and Thursday, it will exceed the $2 trillion valuation coveted by Prince Mohammed. The company is expected to be included in the MSCI emerging markets index on Dec. 17.

“I cannot wait to see the faces of people who missed that opportunity and how they will be chewing their thumbs,” the minister said, calling those who invested “friends and family” set to benefit from any future rise in its value.