Home
Market
Democrat Biden's plan would raise taxes from U.S. companies that pay little
Prev Article Next Article
This post was originally published on this sitehttps://i-invdn-com.akamaized.net/trkd-images/LYNXMPEFB32AX_L.jpg 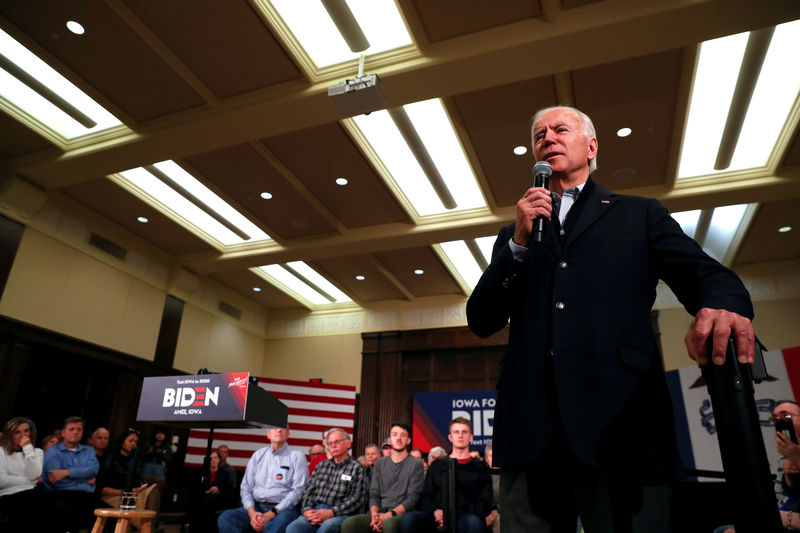 NEW YORK (Reuters) – U.S. Democratic presidential candidate Joe Biden would use taxes on the wealthy and corporations to pay for $3.2 trillion in promised investment in infrastructure, higher education and healthcare, according to an outline of his plans if he captures the White House.

The outline, which puts numbers to several policy proposals for the first time, would implement a new minimum fee on companies that report a profit on their books but manage to pay far less than the official tax rate, which could affect companies such as e-commerce giant Amazon.com Inc (NASDAQ:).

Biden’s campaign team estimates his minimum tax of 15% on the income the most profitable companies report on their books would raise $400 billion, which would help pay for a $1.7 trillion investment to pay for proposed climate change and other infrastructure development.

The former vice president earlier this year criticized Amazon’s $0 federal tax bill in 2018 and said no company making billions in profits should pay a lower tax rate than firefighters and teachers. Amazon has said it pays “every penny” it owes.

Companies can lower their tax bills in a number of ways, including by taking credits for making certain investments or reporting losses to tax collectors years after they took place.

Policy proposals have differed widely among Democrats vying to win their party’s nomination to face U.S. President Donald Trump in the November 2020 election.

U.S. Senator Elizabeth Warren, for example, has proposed spending $20.5 trillion over a decade on healthcare alone to implement a Medicare for All system that she said would lower costs and improve care. That would also be paid for partly by raising taxes on the wealthy and corporations.

The Biden campaign is coupling the minimum tax with a higher overall corporate tax, sanctions on companies that facilitate tax avoidance, ending some oil-and-gas subsidies and more taxes on some corporate income earned abroad, according to the details, which were first reported by Bloomberg News.

Biden also proposes paying for $750 billion in investments in healthcare and the same amount for higher education with other taxes that largely hit high-income earners, such as charging a higher rate on wealthy people’s capital gains and dividends.

Biden campaign policy director Stef Feldman said in a statement that the candidate “is committed to being transparent with the American people about the smart and effective ways he’d pay for the bold changes he’s proposing.”