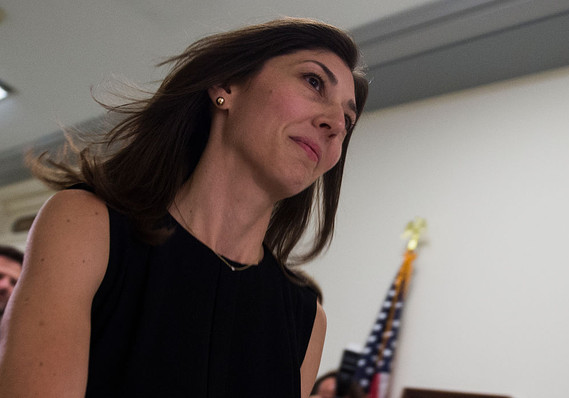 Back in October, President Donald Trump called out former FBI lawyer Lisa Page by name — again — as he regaled an adoring Minneapolis crowd with, as she put it, a “demeaning fake orgasm” that ultimately led her to break her public silence.

Here’s the clip from the event:

At his rally in Minneapolis, Donald Trump did an impression of former FBI agent Peter Strzok having an orgasm pic.twitter.com/JLms1il0xp

While his supporters lapped it up, Page most definitely did not. She had been dealing with this kind of abuse at the hands of the president ever since her texts with FBI agent Peter Strzok slamming Trump were cited as evidence of a vast witch hunt and became a rallying cry for the MAGA crowd.

This is how she described her plight to the Daily Beast, in an interview published Sunday:

‘It’s like being punched in the gut. My heart drops to my stomach when I realize he has tweeted about me again. The president of the United States is calling me names to the entire world. He’s demeaning me and my career. It’s sickening.’

And it happens a lot. According to TrumpTwitterArchives.com, the president has mentioned Page, either through tweets or retweets, at least 33 times on Twitter TWTR, -0.83%  . Most of them sound a lot like this:

The IG Report totally destroys James Comey and all of his minions including the great lovers, Peter Strzok and Lisa Page, who started the disgraceful Witch Hunt against so many innocent people. It will go down as a dark and dangerous period in American History!

Page said she’s been hoping it would all just go away over time, but on the contrary, it’s only gotten worse. “It had been so hard not to defend myself, to let people who hate me control the narrative,” she said. “I decided to take my power back.”

She explained that, even though she knows “there’s no fathomable way” she’s committed a crime, she feels intimidated.

“He’s still somebody in a position to actually do something about that,” Page told the Daily Beast. “To try to further destroy my life. It never goes away or stops, even when he’s not publicly attacking me.”