Home
Stocks
Market Snapshot: Why stock-market bulls are cheering as small-caps play catch-up with broader rally
Prev Article Next Article
This post was originally published on this site

Welcome to the party, little fella.

Small-cap stocks have been a missing piece of the puzzle as the stock market roared back in 2019 from a fourth-quarter drop last year that saw the S&P 500 SPX, +0.32% come within a whisker of a 20% pullback, the widely used definition of a bear market. This week, the small-cap Russell 2000 RUT, +0.42%, which did fall into a bear market during last year’s rout, posted a potential breakout, hitting its first 52-week high in 15 months on Monday and extending gains so far this week.

“The inability for the Russell 2000 to break out was one of the concerning signs present over the past couple of weeks (notice small-caps hadn’t been doing much for most of November), but now that has resolved itself and should be bullish for the broad market,” said Andrew Adams, analyst at Saut Strategy, in a Wednesday note.

“The next steps will be sustaining this rally to potentially break out to new all-time highs over last year’s August peak and hopefully break out against the S&P 500 as well,” he said, noting the performance of the iShares Russell 2000 ETF IWM, +0.50%  relative to the SPDR S&P 500 ETF Trust SPY, +0.31%  in the lower panel of the chart below. 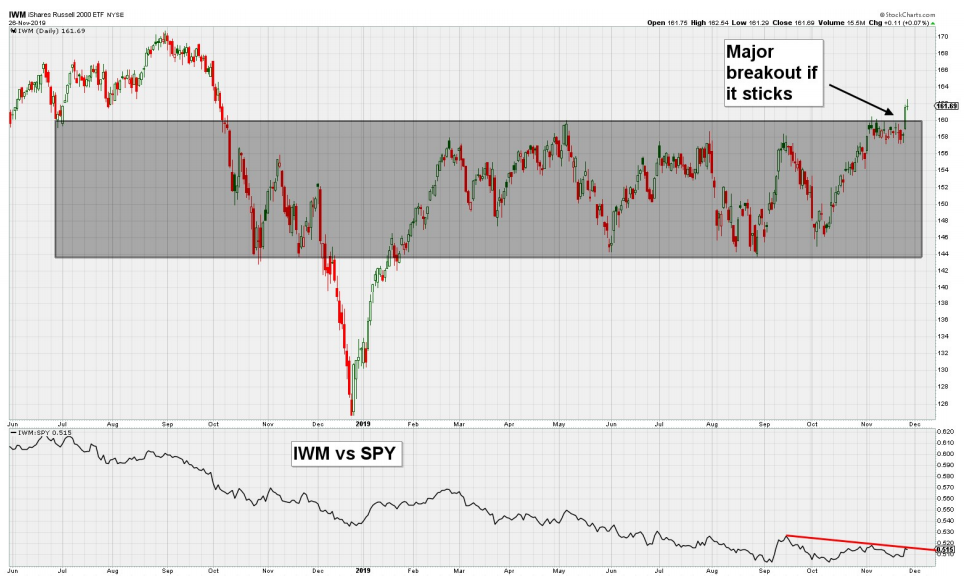 The large-cap benchmark S&P 500 is up more than 25% year to date, while the blue-chip Dow Jones Industrial Average DJIA, +0.08%  is up more than 20% and the tech-heavy Nasdaq COMP, +0.55%  stands more than 30% higher over the same stretch. All three major indexes have posted a record close 10 times each in November.

“Seeing small-caps at 52-week highs is further confirmation to the overall health of this bull market,” said Ryan Detrick, senior market strategist at LPL Financial, in a blog post. “We’ve already seen large-caps and various countries around the world break out, and now we have participation from a once-lagging group. Participation is the key to any lasting bull market, and this is another great sign as we head into 2020.”

Historically, a return to a 52-week high by the Russell 2000 after more than a year has been a positive sign for forward returns, Detrick said, noting that in the past instances dating back to October 1982 the index has risen 10 out of 11 times over the next 12 months with an average rise of 17% and a median gain of 16.4%.

Stocks were putting in a mixed performance Wednesday in trade that was suffering the traditional holiday doldrums. The S&P 500 was up modestly, pushing further into record territory, while the Dow edged lower and the Russell 2000 advanced by around 0.4%. U.S. markets are closed Thursday for Thanksgiving Day and will see an abbreviated trading session on Friday.

See: When do markets close for Thanksgiving?