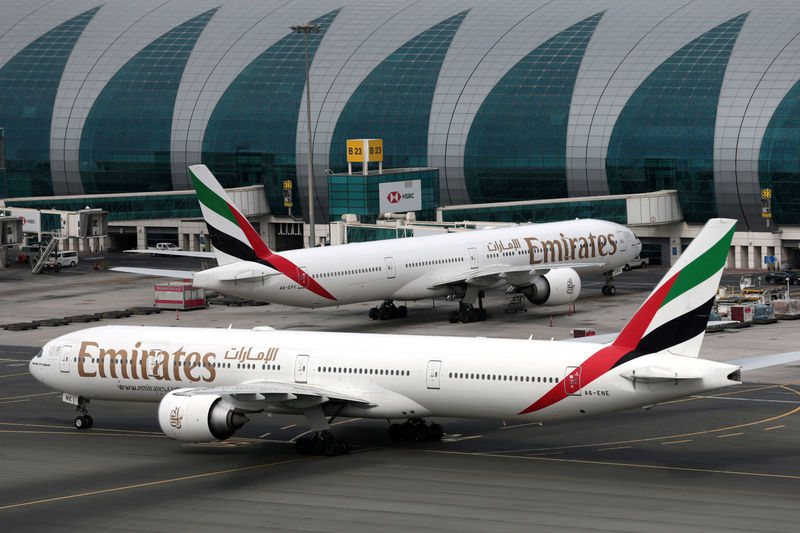 By Alexander Cornwell and Tim Hepher

DUBAI (Reuters) – An eight-month crisis over the grounding of Boeing’s 737 MAX jets and widespread industrial delays are setting an unpredictable backdrop to next week’s Dubai Airshow, with some airlines reviewing fleet plans even as others look for bargains.

The biennial civil and military expo is a major showcase for wares from jumbo jets to military drones but faces growing questions over demand and the capability of overstretched suppliers, delegates arriving for the Nov. 17-21 event said.

Top of their agenda will be the worldwide grounding of the 737 MAX in the wake of two deadly crashes.

Investors who have pushed up Boeing (N:) shares believe the planemaker is turning a corner after the eight month grounding, with the company predicting commercial flights in January. But it also faces a logjam of undelivered jets that could take 1-2 years to unwind.

State-owned flydubai expects its fleet will now shrink by a third this year, highlighting the cost of the grounding for the biggest MAX customer outside the United States. “Flydubai has very big ambitions … given the scale of those ambitions, there’s little they can do but wait and watch, like everyone else,” said Teal Group analyst Richard Aboulafia.

Experts say airline frustrations with plane and engine makers could also disrupt plans by the world’s largest jetmakers pushing for order endorsements. The Middle East’s largest aerospace event will give Airbus (PA:) and Boeing a chance to sit with some of their top customers who have threatened to walk from billions in deals. The planemakers are struggling to deliver aircraft on time, forcing airlines to delay expansion plans, while engines on some jets are consistently causing issues for carriers. “This seems to be a systemic issue across the board,” said Novus Aviation Capital Managing Director Mounir Kuzbari. “As a result, we see stress on the relationship between airlines and the plane and engine makers.” Dubai’s Emirates, by far the region’s biggest airline, has issued a stern warning to plane and engine makers. It will no longer take delivery of aircraft that do not meet performance expectations, raising doubts over $35 billion in pending orders. Airbus, Boeing and engine makers will be looking to allay concerns as they finalize jet sales with Emirates, which is also looking at reducing an order for the delayed Boeing 777X.

Airbus is seen close to a final order for A330neo and A350 jets while Boeing aims to salvage a provisional order for 787s.

Air Arabia (DU:) could, however, steal the show with a planned order of up to 120 Airbus jets, industry sources say.

Kuwait’s Jazeera Airways (KW:) is in negotiations with Airbus and Boeing for around two dozen airplanes.

Past editions of Dubai’s premier trade event have featured blockbuster deals, often led by Emirates as Gulf carriers redrew the aviation map around their ‘super-connector’ hubs.

But the Gulf hub model is increasingly under pressure as the once-rapid growth of the region’s biggest airlines slows. “The market continues to be weak for all airlines in the region; we should see a further 2-3% reduction in passenger numbers for the full year,” said Diogenis Papiomytis, Frost & Sullivan’s Global Program Director for Commercial Aviation. Middle East military leaders touring the displays will try to gauge whether they are on the cusp of another regional splurge on weapons after an escalation in Gulf tensions. A series of attacks over the summer has highlighted potential security gaps among some of the world’s top defense spenders who now increasingly buy from China and Russia.