Home
Stocks
Livability: 6 charming mountain towns that are worth visiting even if you don’t ski
Prev Article Next Article
This post was originally published on this site

Skiing and snowboarding are typically the headlining activities in mountain towns. But for travelers who don’t partake in either of those winter sports, the mountains offer plenty of sideshows and supporting acts to keep you entertained. These six well-rounded mountain communities are proven winter wonderlands, offering plenty to do beyond the slopes.

Nicknamed the “Main Street of the Rockies,” Frisco is located within 30 minutes of a half dozen ski resorts and is an ideal base camp for skiers and non-skiers alike. While it doesn’t have a ski resort to call its own, it does possess a massive sledding hill at the Frisco Adventure Park. A conveyor belt hauls riders to the top, so it’s literally all downhill from there (and we mean that in the best way). To turbocharge the adventure, riders can ask the sledding hill operators to give them a “super spin” so they careen in circles down the snowy, groomed lanes.

Frisco is also home to the Frisco Nordic Center, which, in addition to cross-country skiing, offers snowshoeing and leads full moon tours. “Snowshoeing is a wonderful entry-level sport,” says Frisco Nordic Center’s lead trainer Malin Bengtsson. “If you can walk, you can snowshoe.” Sounds promising, right? Plus, snowshoers are spoiled with panoramic views of the mountain peaks cradling Frisco. For intrepid types, Frisco borders Breckenridge, another great mountain town that has a mountain coaster where riders control their own speed with a foot brake as they zoom down the mountain.

Mountain towns often excel in the quirky department. Jackson County, home to The American Museum of the House Cat, is no exception. A museum dedicated to cats isn’t the only offbeat attraction Jackson County has to offer; there’s also the annual Outhouse Races every winter (Feb. 15 next year), where teams of three push homemade outhouses secured to a set of skis down a racetrack.

Jackson County comprises eight towns situated in the Southern Appalachians on the Blue Ridge Parkway. Winter is prime time for fly fishing, and Jackson County has a map of 15 prime spots marked on its Western North Carolina Fly Fishing Trail where anglers can catch brown, rainbow and brook trout.

If you were inclined to learn how to ski, Park City would be a good place to do just that. Science backs up this claim: Utah, on average, is blessed with 500 inches of snowfall each year. But, thanks to the Great Salt Lake, combined with other geological forces, the snowstorms get colder and drier before they dump on Utah’s mountains. The result? Snow that’s not too dry and light and not too wet and heavy, but rather just right for all levels of skiers with an average density of 8.5 percent water. Utah is so proud of its special snow, the state has gone so far to trademark it as “The Greatest Snow on Earth.®” Plus, we should mention, there’s a ski-in, ski-out whiskey distillery, High West. 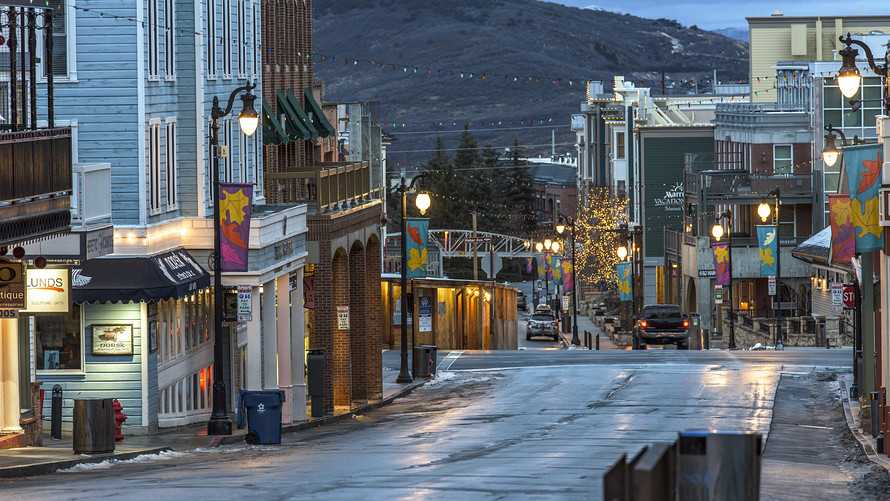 Park City, Utah, is a former mining town and now a top ski resort, and known for the Sundance Film Festival.

But aside from skiing, Park City boasts a hip dining scene, starting with breakfast at Five5eeds, where Instagram-worthy hot cakes are topped with berries, edible flowers and lemon-infused mascarpone, and finishing with a cozy dinner at Firewood, where seasonal food is cooked by woodfire. By day, tourists can chase their own Olympic dreams at Utah Olympic Park, bombing down the lower third of the bobsled tracks that were used in the 2002 Winter Olympics, a ride often led by retired Olympians.

Read: Should you buy a car with all-wheel drive?

History buffs can learn about the silver-mining past of this mountain town at The Park City Museum on Main Street. As a nod to the past, each night at 10 o’clock, a bell sounds just off Main Street. “Once used in the late 1800s to let locals know all the miners made it safely out of the tunnels, the bell evolved as a curfew warning for kids,” explains Dan Howard, director of communications for the Park City Chamber of Commerce and Visitors Bureau.

It’s hard to pick a favorite season in this Colorado mountain town. In the fall, leaf-peepers get the bonus of hearing elk bugle — and an overnight stay at The Stanley Hotel (which was the muse for Stephen King’s book, “The Shining”) will surely get you in the Halloween spirits. 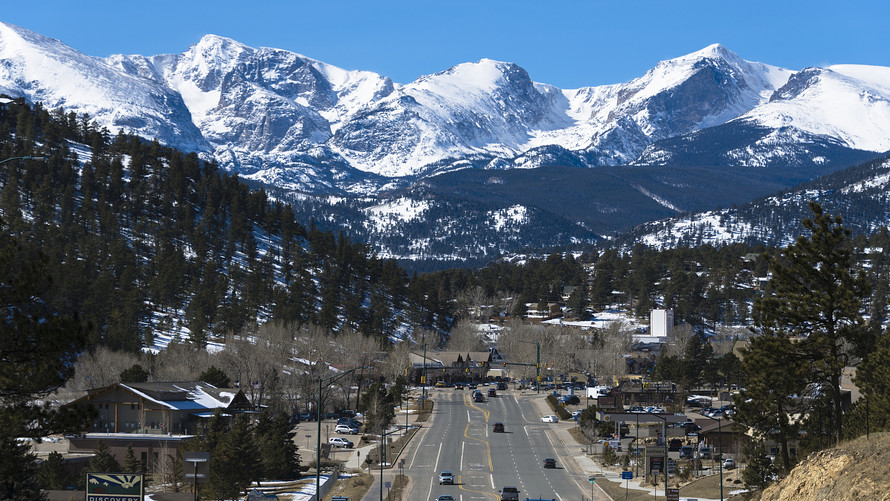 Of course winter looks good on this mountain town, too, with a lesser-known sledding hill in Hidden Valley, which is inside Rocky Mountain National Park. Sledders need to bring their own sleds or tubes, which can be rented or purchased from one of the outdoor gear shops in town. Afterward, warm up at Latitude 105, a restaurant inside the Ridgeline Hotel that borrows beer from its neighbor at Oskar Blues Brewery to make an indulgent beer-cheese soup you’ll be craving long after you leave.

Also see: The best affordable places to live in Colorado

Cascade Mountain peaks, plus lakes and an extinct volcano(!) make this geographically diverse city a hotbed of outdoor adventure. Skip the slopes and go for a dog sled ride along the Oregon Trail of Dreams, which is led by Rachael Scdoris, who was the first legally blind person to complete the Iditarod Sled Dog Race in Alaska. The ride starts in the ski area, and takes people through the Deschutes National Forest. Forest Service Rangers also lead free guided snowshoe tours in the ski area.

For a unique experience, go spelunking or exploring the lava tubes formed by molten lava when the Newberry Volcano erupted and flowed north. Also, Bend is one of the few places in the country that has a dedicated fat bike trail system where riders can mountain bike on snow. TJ Jordan, from the The Hub Cyclery, explains that the bikes are extremely stable thanks to the larger-than-average tires. “Despite the bikes looking bigger in size, and most thinking they are heavy and hard to pedal, they aren’t,” he says. Most fat bikes weigh under 30 pounds and come with gear that makes for a fun experience. After a day of adventure, Jordan says he’d point people to 10 Barrel Brewery to sit by the fire and enjoy a cold beer alongside locals and tourists. “The people are so genuine here. Everyone looks after each other, we all share a common interest and love the outdoors, and truly respect one another and it shows.”

Loon Mountain will certainly roll out the magic carpet for newbie skiers. But, the resort has plenty of other fun winter activities on hand, including a winter zip line that takes bundled-up riders on a 700-feet trip across the Pemigewasset River. The resort also has an indoor rock climbing wall, outdoor skating rink and tubing hill. 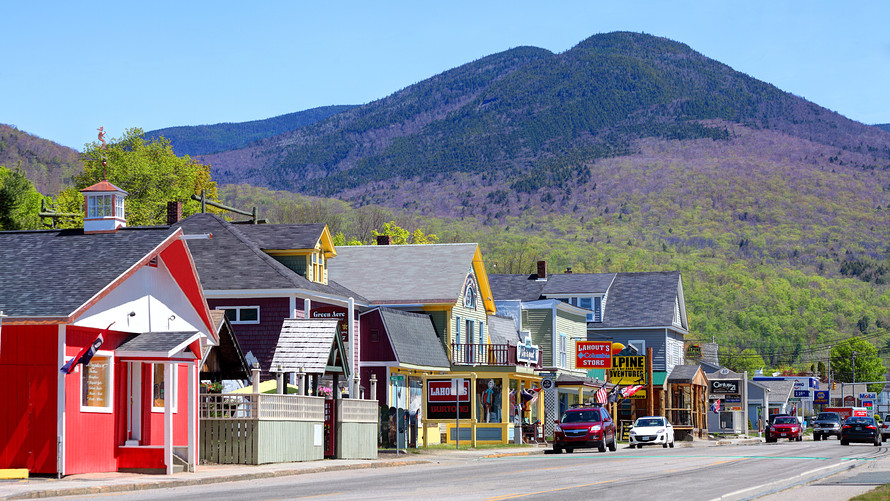 Plus, there are a variety of non-ski related things to do on the resort’s events calendar — everything from snow golf to mountaintop worship services to s’mores-making. For families traveling with “Frozen”-obsessed children, the massive ice castle here will make them feel like they’ve stepped inside the set of the movie. The castles (not actually associated with Disney DIS, +3.76%  ) are a multisensory experience, with music and colored lighting. The memories made here are totally worth having “Let it Go” stuck in your head for months afterward.

Read the original article on Livability.