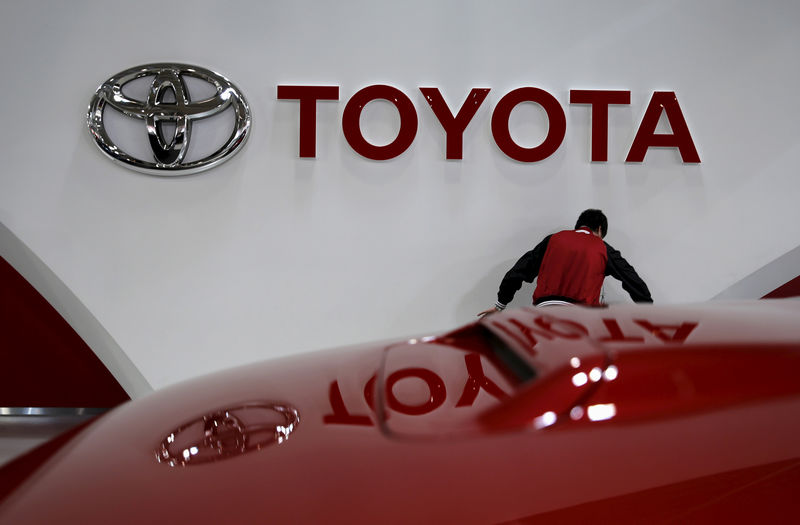 TOKYO (Reuters) – Toyota Motor Corp (T:) unveiled plans for a $1.8 billion share buyback on Thursday, after reporting a more-than-expected quarterly profit on better global sales and an improvement in its North American business.

Japan’s biggest automaker posted a 14% rise in operating profit to 662.3 billion yen ($6 billion) for the three months ended September, from 579.1 billion yen a year ago. It was Toyota’s strongest second-quarter earnings since 2015.

The profit beat an average forecast of 592.3 billion yen, based on estimates from nine analysts, Refinitiv data showed.

The automaker sold 2.75 million vehicles globally during the quarter, up from 2.18 million units a year ago. Sales in North America, Toyota’s biggest market, rose 5.6%, while sales in Asia, including China, climbed 3.4%.

Operating profit in North America, which has been a sore spot for Toyota over the past two years, more than doubled during the quarter as benefits of measures to cut vehicle discounts filtered through.

“New models of the RAV4 and the Corolla, as well as last year’s Camry, have been well received in North America, so we’ve been able to lower incentives,” Operating Officer Kenta Kon told reporters at a briefing.

The car maker has also been expanding sales in China, the world’s biggest auto market, where demand has been strong for its recently updated models of the Levin, Avalon and Camry sedans, along with the ES sedan under its luxury Lexus brand.

Its sales in China rose 7.2% in the first 10 months of 2019, bucking an overall softness in the country, which is bracing for a second year of contraction amid slowing economic growth and tighter vehicle emissions standards.

Flush with cash following the strong quarterly showing, the automaker said it would buy back up to $1.8 billion worth of its common stock, or 34 million shares, through end-March.

Toyota maintained its forecast for operating profit in the year to March to ease 2.7%, after three years of gains.

It expects a strengthening yen to weigh on its bottom line, although it now expects the currency to trade at 107 yen to the U.S. dollar, versus a previous forecast of 106 yen.

Toyota’s projected slip in profit is subdued versus smaller rivals such as Subaru (T:) and Mazda (T:), which have slashed their full-year outlooks by 15%-45% in the past week amid weaker demand for their cars.

An ongoing U.S.-China trade war and slower economic growth have prompted a sales downturn in the auto sector worldwide.

This is weighing on profits in the sector as it comes when automakers are also having to invest heavily in new technologies including electric cars, autonomous driving and ride-sharing services to survive a shift away from car ownership.