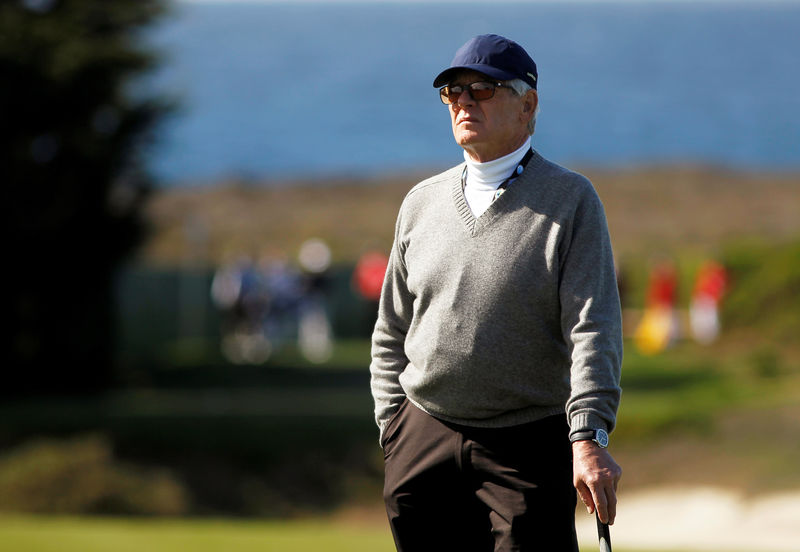 (The writer is a Reuters contributor; the opinions expressed are his own.)

NEW YORK(Reuters) – When Charles Schwab (NYSE:) stares intently at his smartphone, you can be sure of one thing: He is checking the stock market.

The 82-year-old has been in a heated love affair with stocks and capitalism ever since starting his brokerage back in 1971.

Schwab sat down with Reuters to talk about his latest book, “Invested,” in which he talks about the bumpy, winding, unlikely path that landed him where he is today.

A few key lessons he learned along the way:

1. While you’re young, get out there and work every job you can.

You might be surprised to learn some of the wacky gigs from Schwab’s teenage years: Plucking duck feathers, raising hens, collecting Coke bottles from under grandstands, driving a tractor at a sugar beet farm, working as an oilfield roustabout. Those early moments taught him as much about human nature as anything else in his career.

“Dealing with people on that level, you get a real understanding of them,” he said. “When I was working on the beet farm alongside Hispanic agricultural workers, they may not have been able to speak any English, but they were real people with real families and real feelings. I’ve been lucky to have experiences like that, and I think all parents should get their teenagers out doing that kind of stuff.”

2. Take the risk – even if you are not totally ready.

When trading commissions were first deregulated decades ago, no one – including Schwab himself – truly knew how a low-cost brokerage strategy was going to play out. But he went for it, and his current $7.8 billion net worth (according to Forbes) indicates how well that bet paid off.

His motto: “85% ready is good enough,” he says. “If you’re 85% of the way there, then make the decision to go for it. Hesitation doesn’t do anybody any good.”

3. Turn your weakness into advantage.

Many might not know that Schwab is dyslexic, and still reads slowly today. Even at 82, you can tell that his childhood experience cut him to the quick. “Dyslexia wasn’t even defined when I was a kid,” he said. “You were either slow, or stupid. People said things like, ‘Why don’t you do better? Just work harder!’”

But a remarkable number of people with learning differences, such as Virgin Group’s Richard Branson and Apple’s Steve Jobs, turned into extraordinary business leaders – perhaps because of that ability to look at things differently, process events in new ways, and see things others don’t see.

Another of his lowest career moments: When the Schwab board let go former Chief Executive David Pottruck. Not only because it was a delicate situation with a longtime colleague, but because it meant Schwab himself had to reassume the title of CEO.

“That was a really down time,” he remembered. “It felt like a fire hose of water coming at my head, becoming a CEO again at sixtysomething.” But a public company’s primary responsibility is to its shareholders, and even though it wasn’t comfortable or easy, Schwab did what he felt had to be done.

Schwab has five kids and 13 grandchildren, so you might think that he envisions an army of next-gen Schwabs taking over the company after he’s gone. Not so.

“They have to follow their passions, whatever that might be,” he said. “If you want to be a teacher, be a teacher. There’s no need for them to work in finance. In fact only one of my children is in the business – my eldest daughter Carrie, who runs our foundation. She actually started for us as a file clerk.”

For whoever ends up running the show, he hopes that this new book can be a sort of GPS, steering them in the right direction. “I know full well that there is an end zone out there for me someplace,” he quipped. “I wrote this so that employees and customers would know where we came from, and understand the values we talk about. Maybe it could be a kind of Bible going forward – for the next chapter, after I’m gone.”