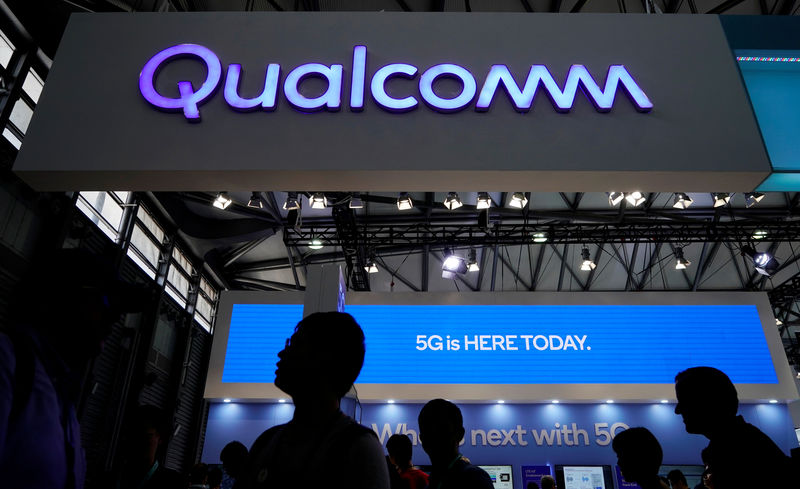 By Stephen Nellis and Munsif Vengattil

(Reuters) – Qualcomm Inc (O:) shares rose more than 5% on Wednesday after it forecast current-quarter profit above Wall Street expectations, as its all-important licensing segment benefits from a deal with Apple Inc (O:).

Qualcomm, the world’s biggest supplier of mobile phone chips, derives most of its profits from a business segment that invents technologies and licenses them. The company forecast between $1.3 billion and $1.5 billion in revenue for that segment for its fiscal first quarter, above analyst expectations of $1.23 billion, according to IBES data from Refinitiv.

The licensing business drove the adjusted profit forecast with a midpoint of 85 cents per share, also above analyst expectations of 83 cents per share, according to Refinitiv data. On the chip side, Qualcomm’s chief executive, Steve Mollenkopf, told Reuters in an interview that the company has won deals to supply 230 device designs with 5G chips, up from 150 a quarter ago.

“We’re continuing to see strength in the licensing business, particularly after we’ve added in the deal we signed this year with Apple, and we’re on the front end of the 5G transition, which will impact our product business,” Mollenkopf said. “We’re closer to that and we’re really seeing the signs that we should be confident.”

The company has resolved license disputes with major customers such as Samsung Electronics Co Ltd (KS:) and Apple, but remains in a license dispute with Huawei. “Although negotiations continue, we have not reached a final agreement with Huawei,” Qualcomm said on Wednesday.

Qualcomm said it expects between 1.75 billion and 1.85 billion smart devices with modem chips, including 175 million to 225 million 5G handsets, to be sold in 2020. Because Qualcomm collects license fees on devices that use cellular connections to wireless data networks, a greater number of devices sold often results in higher revenue and profits.

Qualcomm said that for the fiscal fourth quarter ended Sept. 29, revenue in its licensing segment was $1.16 billion, beating estimates of $1.10 billion, according to data from FactSet.