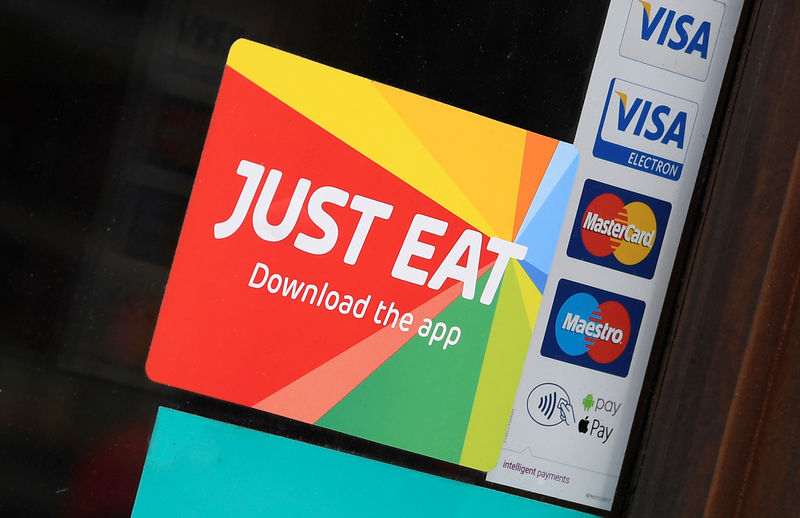 © Reuters. Signage for Just Eat is seen on the window of a restaurant in London

(Reuters) – Takeaway.com (AS:) has changed its line of attack in the battle to buy food delivery ordering service Just Eat (L:), effectively lowering the threshold for approval of its offer to fend off rival suitor Prosus (AS:).

Just Eat had previously agreed on the terms of a 4.7 billion pound all-share deal that prompted internet giant Prosus to weigh in with an unsolicited cash offer of $6.3 billion, or 710 pence per share, setting an increasingly fractious contest in motion.

A merger of Takeaway and Just Eat would create one of the biggest food delivery groups outside China, rivaling Uber Eats (N:), with market leadership in Britain, Germany, the Netherlands and Canada.

At Takeaway’s current share price of 72.45 euros, its offer is valued at 607 pence per share, equating to roughly $5.3 billion.

Takeaway announced on Monday that it had changed the structure of its takeover attempt from a scheme of arrangement that needed 75% approval by both sets of shareholders to a formal offer that requires 75% of Just Eat shareholders to give the nod.

If the Takeover panel agrees, that could drop as low as 50% plus one share.

Takeaway spokesman Joris Wilton said the new structure gives the company “increased flexibility” in the fight, including the possibility that the deal could be allowed to go through with a bare majority of 50%.

Shares in Just Eat rose 0.5% to 740 pence, significantly above the Prosus offer, indicating that investors expect a higher bid from one side or the other.

Wilton said Takeaway has no plans to raise its bid or add a cash component. Prosus could not immediately be reached for comment and Just Eat did not respond immediately to a request for comment.

The change also means that a planned Dec. 4 shareholder vote on the original agreement has been put on hold. Takeaway will instead launch a tender offer that is expected to expire before the end of the year, Wilton said.

“All eyes will be on whether Prosus increases its offer,” Credit Suisse (SIX:) analysts said.

The takeover battle heated up last month after Cat Rock accused German rival Delivery Hero (DE:), which is 22% owned by Prosus, of selling down its 13% stake in Takeaway to suppress the value of the shares and lower the attractiveness of Takeaway’s offer.