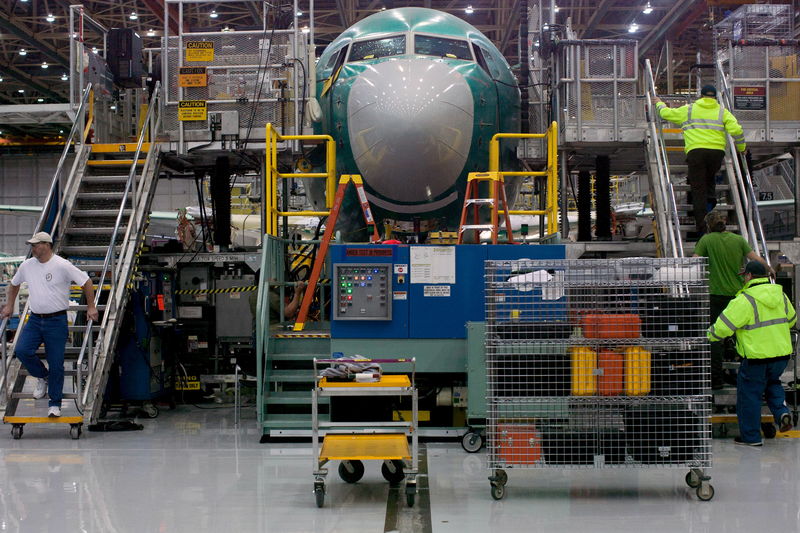 By Tim Hepher and Anshuman Daga

HONG KONG (Reuters) – Airlines that have been forced to rejig operations due to the grounding of the 737 MAX could face a markedly different problem when Boeing Co’s (N:) best-selling jet is finally cleared to re-enter service: a gradual switch to concerns about oversupply, a leading analyst warned on Monday.

The Chicago-based planemaker has continued to produce the jet since it was grounded in March in the wake of two fatal accidents, and is expected to speed deliveries by 40% to 70 units a month when its factory doors reopen, in a bid to start clearing the backlog.

Rob Morris, global head of consultancy at UK-based Ascend by Cirium, said the combination of any rapid rebound in deliveries, economic worries and an accumulation of market pressures dating back before the crashes could make it hard to absorb the jets.

“Next year is the challenge. When the dam breaks and the MAX starts to flow, there are going to be a lot of aircraft,” Morris told a briefing ahead of the Airline Economics Growth Frontiers conference late on Monday.

“There could potentially be as many as 1,000 surplus aircraft next year.”

Until now, most concern has focused on whether regulators would permit an orderly return to service by avoiding gaps in approvals between different countries.

But Morris, who has argued a long up-cycle in aviation is nearly over, said there were also risks in opening floodgates too quickly, overwhelming fragile growth in travel demand.

Still, he and other delegates at back-to-back aviation finance gatherings in Hong Kong agreed it would take Boeing 18 months or longer to deliver all the stranded aircraft.

The operation will be one of the industry’s biggest ever logistical challenges and any glitches or delays could act as a further brake on supply.

“Getting all those aircraft, that are currently parked, off the ground could take two years,” John Plueger, chief executive of Air Lease Corp (N:), said in an interview last week, adding he did not see fundamental changes as a result of the MAX’s return.

“It is not as if all these MAX could be delivered over a one-, two- or three-month period … so it is not an open floodgate and 350 planes all coming onto the market tomorrow,” he told Reuters on the sidelines of the Airfinance Journal Asia Pacific conference.

Boeing has said it aims to return the 737 MAX to service in the United States by the end of 2019 after making software changes in the wake of the crashes, which killed 346 people.

Europe’s top regulator said on Monday the airliner is likely to return to service in Europe during the first quarter of 2020.

Analysts say more than 300 MAX aircraft have been produced since March when commercial flights were banned and deliveries frozen. This could rise to 400 by the time the plane returns to service.

Boeing is additionally expected to deliver close to 600 jets straight from the production line next year. It has indicated it plans to deliver up to 70 jets a month, equal to a previous record. Of this, analysts say around 20 are expected to be drawn from inventory parked at its factories and the rest newly built.