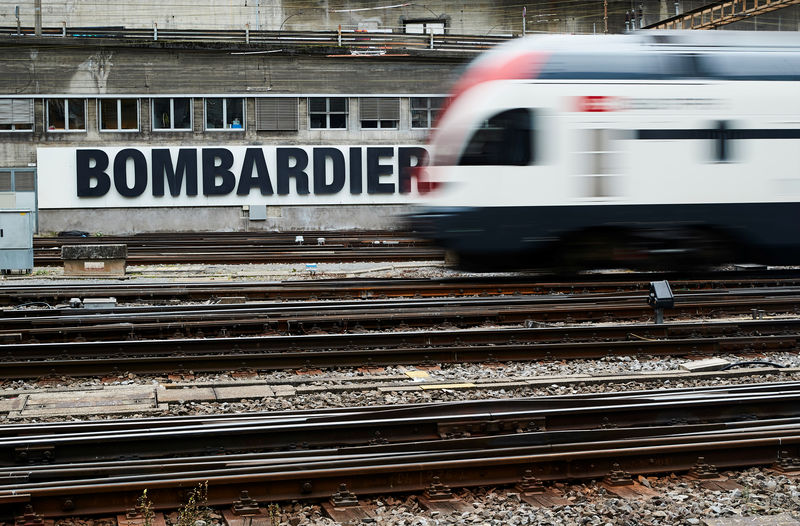 MONTREAL (Reuters) – Bombardier Inc (TO:) said on Thursday it would meet a key 2019 target and announced a deal worth more than $1 billion with Spirit Aerosystems (N:), sending shares up nearly 7% despite reporting it burned more cash than expected.

Montreal-based Bombardier is in the middle of a restructuring, shedding underperforming commercial plane programs to focus on more profitable business jet and rail units.

The company spent more cash than expected during the third quarter while bringing its flagship corporate jet to market and amid project delivery delays in its key rail business, the company’s largest division by revenue.

Yet Bombardier said its free cash flow usage for the year would remain at around $500 million and reiterated its 2020 outlook for positive earnings growth and cash generation.

“We believe we have seen the low point on BT margins in 2019,” Di Bert told analysts.

The company also said it will sell two aerostructures facilities, including one in Northern Ireland, and a smaller U.S. repair plant, to Spirit for $500 million cash and $700 million in assumed liabilities. Reuters early Thursday reported the two were in advanced talks.

The Belfast plant, which produces wings for Airbus’s (PA:) A220 jet, is considered politically sensitive as it is the largest high-tech manufacturer in Northern Ireland with a workforce of around 3,500.

The plant “is absolutely integral to Northern Ireland,” East Belfast member of parliament Gavin Robinson said in a statement welcoming the move.

British business minister Nadhim Zahawi on Thursday called the deal great news for workers and a welcome investment in the United Kingdom.

Airbus, which had been monitoring the sale, said in a statement the company is confident “Spirit’s acquisition of Bombardier’s aerostructures assets will support the strong and sustainable future for the A220 program.”

Earlier in the day, Bombardier said free cash flow usage for the third quarter rose 84% from a year earlier to $682 million. Analysts on average were expecting a free cash outflow of $332.98 million, according to IBES data from Refinitiv.

Bombardier will need to deliver 10 to 15 Global 7500 jets, which list for $73 million each, during the last three months of 2019 to meet its target of 15 to 20 deliveries this year. The company has delivered five Global 7500 jets to date.