Health and genetics aren’t the only factors that affect life expectancy — location might, too.

Current location has a “large causal impact” on a person’s lifespan, according to researchers at Stanford University and Massachusetts Institute of Technology, who looked at Medicare beneficiary data and how location affects mortality at and after age 65. Remaining life expectancy at age 65 grew 1.1 years, or 5%, if a person moved from a low-level locale to one that showed high levels of life expectancy.

Areas with the “least favorable effects” on life expectancy were in the South and Southwest, compared with those with the most favorable impact, which were found in the Northeast and parts of Florida and California. The correlation can be weak in certain cases. Moving to Santa Fe, N.M., and Denver, which are normally locations with high life expectancies, had a negative effect on retirees who moved there.

See: Here’s exactly where you should retire — based on what’s important to you

People need only move to a more favorable destination to reap the benefits of a longer life expectancy, and how much time they spend there doesn’t actually affect how much longer they live, the study found. “These results suggest that location may affect the life expectancy of the elderly through its effect on health shocks, such as temperature or pollution, as well as the response to those shocks, such as health care,” the researchers noted. 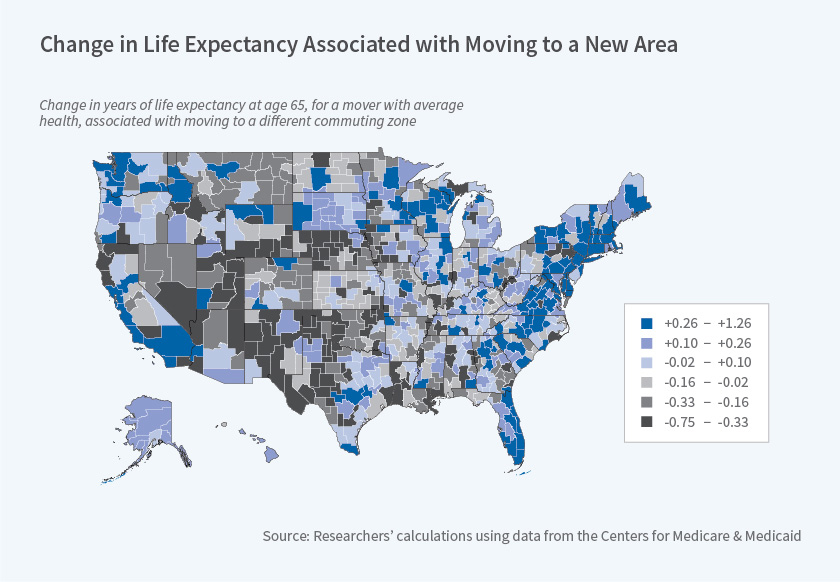 Still, the location itself does play a role in behavioral changes. The locations that had a greater potential to expand lifespans were those that had less extreme climates, less pollution and fewer automobile deaths and homicides. Residents in those areas also had higher income and education, and were more likely to exercise and less likely to smoke.

Relocating to a new city in retirement is a goal for some Americans, but it can be difficult to decide where the next residence should be. There are numerous considerations to make, including the cost of living in that city — for housing but also groceries and utilities. Retirees also need to review where nearby hospitals and medical centers are and how close they are to certain types of doctors if they need specialized care. Other factors include taxes, temperature, vicinity to family members and friends, and public transportation.

Aside from the necessities, retirees should look for nearby cultural attractions, including museums and universities, and access to physical activities, such as those found at a park, mountain or beach. The list of factors grows when retiring abroad, and includes language barriers, access to Social Security and health insurance as well as time zones to communicate with loved ones back home.